On Tuesday, January 25, 2022, with the efforts of the Office of Islamic Studies on Cyberspace (OISC) the ninth live webinar titled “Muslim Women’s Activism in Cyberspace” was held.

AhlulBayt News Agency (ABNA): On Tuesday, January 25, 2022, with the efforts of the Office of Islamic Studies on Cyberspace (OISC) the ninth live webinar titled “Muslim Women’s Activism in Cyberspace” was held.

The meeting was organized by the Office of Islamic Studies on Cyberspace (OISC), in collaboration with Heyatonline, ABNA News Agency, and the Representation of the Supreme Leader in Farabi Campus of the University of Tehran.

At the beginning, Shaykh Mahmoud Rafian, the scientific secretary of the meeting, said: Cyberspace has transformed almost every aspect of our lives.  With the vast growth of new communication technologies, many changes have taken place in societies. Therefore, knowing and understanding this space is essential for women and mothers who make up half of the population and are important members of family and society.

Referring to the unique role of some women in historical periods, Mahmoud Rafian said: According to chapter Tahrim the 66th Surah of the Quran, Asiya, the Great Royal Wife of the ancient Egypt’s Firaun (Pharaoh) and Maryam the mother of Jesus have made great changes in history and society. So much so that God has made them role models for believing men and women. Therefore, Muslim women’s activism in society and in cyberspace is essential.

Dr. Khamis is a former Mellon Islamic Studies Initiative Visiting Professor at the University of Chicago. She is the co-author of the books: Islam Dot Com: Contemporary Islamic Discourses in Cyberspace and the book: Egyptian Revolution 2.0: Political Blogging, Civic Engagement, and Citizen Journalism. She is the co-editor of the book: Arab Women’s Activism and Socio-Political Transformation: Unfinished Gendered Revolutions. Additionally, she authored and co-authored numerous book chapters, journal articles and conference papers, regionally and internationally, in both English and Arabic. She is the a member of the editorial boards of several journals in the field of communication, in general, and the field of Arab and Muslim media, in particular. 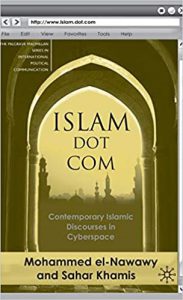 Dr. Khamis noted the importance of the topic of this meeting and said: “There are, unfortunately, a lot of stereotypes, misunderstandings, and negative images about Islam and Muslims, in general, and Muslim women, in particular. Now we have a very important tool to address some of these stereotypes, negative misperceptions, and negative images. Nowadays, we can use cyberspace, social media, and digital networks to correct some of these false images and stereotypes about Islam and Muslims, and especially about Muslim women. A lot of my research in this area has also been dealing with the notion of Islamophobia and how to overcome it and fight it in cyberspace.”

Then the professor at the University of Maryland referred to some of the influential activities of American Muslim women in social media networks. She said: “There have been some efforts on the part of Muslim women to use cyberspace in a very effective way to counter and overcome some of the negative images and stereotypes against them.” In 2016, in response to a question during a presidential debate about growing Islamophobia, Donald Trump said that “we have to be sure that Muslims come in and report when they see something going on. When they see hatred going on, they have to report it.” His response showed that he considered Muslims suspicious and dangerous and that he did not actually take any action against Islamophobia. His comments inspired a new hashtag, #MuslimsReportStuff, which quickly went viral online.

For example, one person tweeted: ‘My mother cooks the same soup every day. I’m going to report her to the FBI #MuslimsReportStuff,’ while another tweeted: ‘My brother does not clean his room, I’m going to report him to the authorities #MuslimsReportStuff.’ This online campaign was very hilarious, very funny, but also very critical. With these tweets, they wanted to show how Muslims are just ordinary people like everyone else, and, therefore, there is no reason for them to be seen as suspicious, dangerous, scary, or different.

Dr. Khamis then mentioned another example, which is the online campaign #CanYouHearUsNow,” which triggered a wave of criticism against Trump. She said: “When Donald Trump mocked the silence of a Muslim mother, Ms. Ghazala Khan, who was mourning the death of her son, Muslim women activist groups brilliantly launched a social media campaign asking women to speak out using the hashtag #CanYouHearUsNow. Trump’s insensitive mockery showed that Islamophobia is oftentimes associated with other types of discrimination, including gender discrimination. However, by launching this successful campaign, which quickly went viral on social media, American Muslim women have shown that they can overcome negative stereotypes against them, and that they can always make their voices heard.

As a researcher in both the field of cyberspace and women’s studies, Dr. Khamis added: “France has been priding itself for being the nation of liberty, fraternity, egalitarianism, and brotherhood. But, unfortunately, the policies of the French government have been very different. They have been very discriminatory against Muslims, in general, and Muslim women, in particular, in a very sad way. In response to the French government’s relentless efforts to ban the hijab, Muslim women started the online campaign #HandsOffMyHijab.

This hashtag sent a loud and clear message: ‘Don’t touch my hijab, and don’t ask me to take it off. It is not your right to interfere in my right as a Muslim woman to decide to wear the hijab. This right should be protected, and you should not try to take this right away from me.’ This became another very successful campaign. It went viral on social media and it became very widespread and very popular in a short time. So that’s another example of Muslim women using social media and new media for the purpose of raising their voices and defending their identities and their just causes.”

The co-author of the book Islam Dot Com said: “The Internet became an important window. It's a window through which Muslim women could see the rest of the world, while also being seen by the rest of the world, at the same time.  This is particularly more important in the case of Muslim women who live in more traditional and conservative societies.”

She then raised the issue of women’s right to education. She said: “In some parts of the Muslim world there are still rural communities that until this moment fight women’s education. I know that this is not a problem in Iran, because I visited Iran before, when I was attending a conference, and I know that Iranian women are mostly highly educated. I’ve seen women in different positions and different ranks. Many of them were working as university professors. However, this is not the reality in every part of the Muslim world, unfortunately. Let’s bear in mind that the Internet is an important tool, and it provides great opportunities, to demand women’s rights. However, it’s not a magical tool, and it cannot bring about change, democracy, freedom, transformation, human rights, or women’s rights all by itself. We need to have collective and well-coordinated efforts to make all of this happen.”

Responding to the question “Do you think a Muslim woman can be active in cyberspace, while preserving Islamic values?” Dr. Sahar Khamis said: “I believe in Islamic feminism. Some people think that feminism means that women are breaking away from their values, and abandoning religion. However, this is wrong.

Islamic feminism means that women could claim their own rights within an Islamic framework. They can be very active and effective in their societies, in everyday life, and even online in digital media social media, while still adhering to their religious values and their beliefs.

A good example is Muslim women who are using cyberspace to raise their voices and to defend their own rights, by saying, for example: ‘It is my right to wear the hijab. It is my right to wear the niqab, and you cannot just tell me that I cannot do that because I’m living in France, or living in Switzerland, or living in Denmark.’ So, I think that these women are sending a very strong message, which is ‘I’m adhering to my identity, I’m adhering to my own beliefs, and I’m using digital media and social media not to break away from my religion, but, rather, to actually protect my own religious values and beliefs, as a Muslim woman.”

At the end, Dr. Sahar Khamis stressed the need for unity in the Muslim World. She said: “Unfortunately, right now there are conflicts between some Sunnis and Shiites, as well as between Muslims inside the same country, and Muslims in different countries, and all of these conflicts weaken the Muslim World. We need to have more unity. We need to have more coordination. If we had all of these things, the concerns of Muslim women will be better articulated, their voices will be loudly amplified, and their realities will be visible to the rest of the world.

So, I think that the “Office of Islamic Studies on Cyberspace” is doing a great job in terms of starting important initiatives and dialogues, which bring together scholars from across the Muslim World. I’ve been monitoring some of the work that you’ve been doing in the realm of countering some of the negative aspects of cyberspace, such as spreading negative stereotypes about Islam and Muslims online, and your efforts to create more platforms on cyberspace which could bring together different voices from the Muslim world, across different ethnic, racial, national, and gender categories. I hope that you will continue this important mission and this significant work for many years to come.