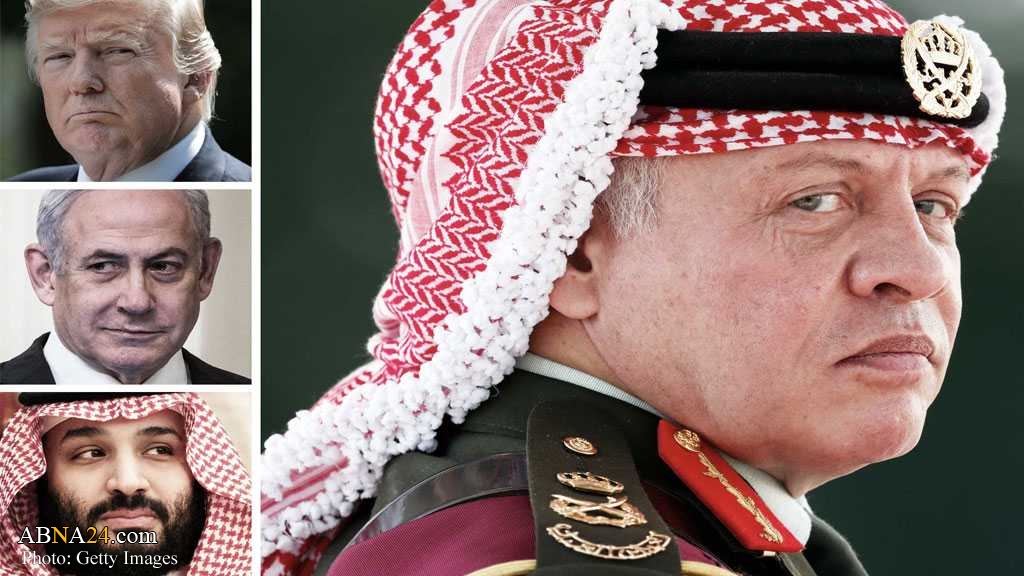 Israel, Saudi Arabia and the United States joined forces to pressure Jordan's King Abdullah II to partake in the US-sponsored "normalization deals" with Tel Aviv, according to the Washington Post.

AhlulBayt News Agency (ABNA): The Zionist entity, Saudi Arabia and the US joined forces to pressure Jordan's King Abdullah II to partake in the US-sponsored "normalization deals" with Tel Aviv, according to the Washington Post.

The Jordanian monarch resisted the attempts, leading to a plot to "destabilize" the country, that ensnared the king’s half-brother Prince Hamza and former senior officials Bassem Awadallah and Sharif Hassan bin Zaid.

According to the report, Saudi crown prince Mohammad bin Salman [MBS], former Zionist PM Benjamin Netanyahu and former US President Donald Trump were at the center of the intrigue.

“It became a belief of Trump that the king was a hindrance" to his plan, a former senior CIA official was quoted as saying.

The report noted the close relations that Trump and his son-in-law and senior adviser Jared Kushner had forged with MBS, Saudi Arabia’s de-facto ruler.

Abdullah was said to be concerned those expanded ties came at Jordan’s expense, because of his reservations over the US proposal for the Middle East.

Abdullah is recognized as the custodian of the Haram esh-Sharif and the al-Aqsa Compound, and other Muslim sites in the Old City, which the Zionist regime occupied in the 1967 Six Day War.

The newspaper wrote that Abdullah felt the US, ‘Israel’ and Saudi Arabia were trying to push him out as custodian.

As Kushner’s campaign to advance Trump's plan picked up last year, he also hoped to help facilitate a normalization pact between the Zionist entity and Saudi Arabia, according to the report. However, Abdullah was seen as an obstacle to such a rapprochement.

A key figure in the report was Awadallah, one of the former senior officials implicated in the alleged recent plot. Awadallah, a cabinet minister and onetime head of the royal court, moved to Saudi Arabia in 2018 and became close with the Saudi crown prince.

“A sticking point for us is al-Aqsa. The king [Abdullah] uses that to browbeat us and keep his role in the Middle East,” Awadallah was reported to say regarding the US plan.

An unnamed former US official, according to the report, said he was told by Awadallah that “MBS is upset because he can’t get a deal because he can’t handle the reactions of Palestinians if the king holds his position" on occupied al-Quds.

The Post also quoted from a Jordanian investigative report on the coup plot.

“Awadallah was working to promote the ‘deal of the century’ and weaken Jordan’s position and the King’s position on Palestine and the Hashemite Custodianship of Islamic and Christian holy sites in al-Quds,” the Jordanian report said.

According to the same report, bin Zaid, the other senior Jordanian official implicated alongside Awadallah, met in 2019 with two officials from a foreign embassy in Amman “to inquire about their country’s position on supporting Prince Hamzah as an alternative to the King.”

The Post said an unnamed Western official who gave him the report believes the embassy was likely the US mission in the Jordanian capital.