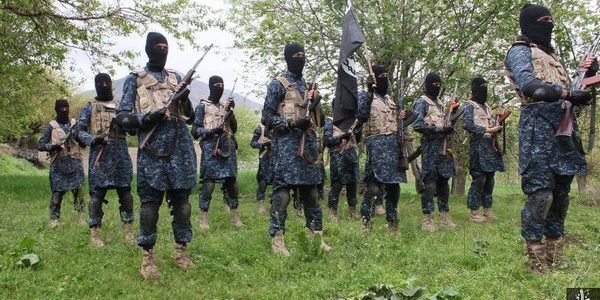 The US has been reaching out to groups opposing the Taliban, such as Daesh, and secretly giving money to them.

AhlulBayt News Agency: The US has been reaching out to groups opposing the Taliban, such as Daesh, and secretly giving money to them.

Zamir Kabulov, the Russian Presidential Envoy to Afghanistan, expounds the reasoning for this covert support thus:

Because they really want to avenge their shameful military political defeat in Afghanistan, and in retaliation, they do everything so that peace isn't established in this troubled land.

With the armed opposition in Afghanistan, the Anglo Saxons are covertly sponsoring Daesh, who are aimed at undermining not only the stability of our Central Asian partners, but also the security of Russia.

Allegations of the US supporting Daesh, in particular, have been around for a decade at this point. Sometimes they even come from US officials.

President Obama; he's the founder of ISIS … I would say the cofounder is Hillary Clinton.

Turkish President, Recep Tayyip Erdogan is among the top officials that accused the United States of backing Daesh. Erdogan made the accusations in response to US accusations against his government for supporting terrorist groups.

Now they give support to terrorist groups including Daesh, YPG, PYD, it is very clear, we have confirmed evidence with pictures, photos and videos.

In a three year field study of the Daesh supply chain, it was found that the military hardware and external funding that anti Assad rebel groups received from the US found their way into the hands of Daesh.

With all the accusations of direct US involvement in the founding of Daesh, the indirect involvement, which most of the world agrees resulted in the creation of the terror group, is the "power vacuum" that the US left in the region by fighting the many wars it fought, especially the invasion of Iraq and the support of Syrian rebel groups.

The US effectively fought a war in Afghanistan for twenty years, with a budget of over 2.1 trillion dollars, just to replace the Taliban with the Taliban.

The Taliban have been accused of many things since their swift power grab in August 2021 but what they have managed to do is to stabilize the country ridding it of power struggles, which means groups like Daesh, who still have a presence in the region, were unable to establish bases in Afghanistan.

Despite carrying out terrorist attacks, even after the Taliban took over, the number of such attacks has dropped significantly over the past year.

Now with approximately 97% of the Afghan population living below the poverty line, with over half of the country's assets frozen by the US, the last thing the country can afford is US shenanigans trying to prop up Takfiri terrorist groups there.

US Secretary of State Antony Blinken recently added insult to injury by justifying the way the US left Afghanistan, claiming that if the “coalition forces” had remained there "it would have, I think, made much more complicated the support that we've been able to give, and others have been able to give, Ukraine."

As if Afghanistan were a pawn in the grand scheme of US political agendas, an attitude that isn't too uncommon in US politics, applicable to friend and foe, without exception.

Instances of such an attitude are numerous from the promise of retaliation to Saudi Arabia over the murder of Jamal Khashoggi, and then doing nothing about it because Saudi Arabia is a strategic US partner, to using Taiwan as a means to get under China's skin, which could lead to a conflict whereby Taiwan will turn into a pawn for US political games.