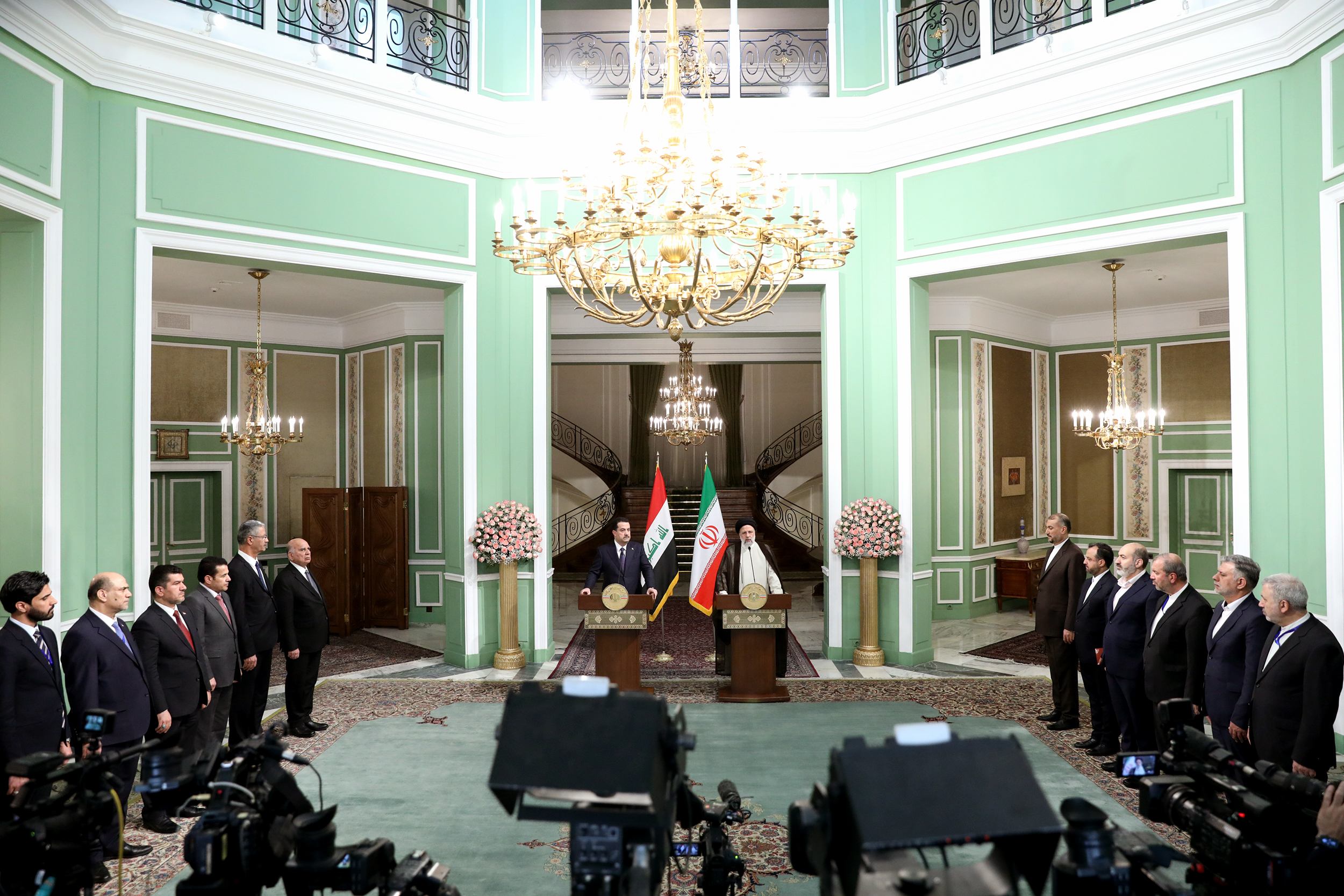 The Iran's President stated, "Today, Iran and Iraq have very good and close cooperation in a wide range of political, economic, security, social, cultural, scientific and technological issues, and we hope that this cooperation will improve in the new era".

AhlulBayt News Agency (ABNA): The Iran's President stated, "Today, Iran and Iraq have very good and close cooperation in a wide range of political, economic, security, social, cultural, scientific and technological issues, and we hope that this cooperation will improve in the new era".

Speaking at a joint press conference with Iraqi Prime Minister Mohammed Shia' al-Sudani, Ayatollah Dr Seyyed Ebrahim Raisi described the relations between the Islamic Republic of Iran and Iraq as having deep and historical roots and stemming from the common beliefs of the two nations, and said, "The peak of these relations were manifested in the glorious Arba'een ceremony and the excellent hospitality of the Iraqi government and nation to the pilgrims of Imam Hussein (AS), especially the Iranian pilgrims, which deserves sincere appreciation".

Stating that Mr Al-Sudani's inauguration as the Prime Minister of Iraq is the result of the agreement and understanding of the various political groups of this country, the President expressed hope that the result of the work of the new Iraqi government serve the Iraqi nation more and bring about more cooperation with the neighbouring countries".

The President stated, "Today, Iran and Iraq have very good and close cooperation in a wide range of political, economic, security, social, cultural, scientific and technological issues, and we hope that this cooperation will improve in the new era".

The President emphasised security, peace and stability in the region and stated, "From this point of view, the fight against terrorist groups, organised crimes, drugs and any danger that threatens the region is agreed and emphasised by the two countries".

Ayatollah Raisi added, "Security, peace and stability in the region must be provided by the countries of the region, and the presence of outsiders does not bring security at all, but causes many problems for the region".

In another part of his speech at the joint press meeting with the Prime Minister of Iraq, Dr Raisi considered the presence of Mr Al-Sudani in Iran as a turning point in the relations between the two countries and stated, "Our negotiations are a big step in the direction of improving relations and also advancing issues between the two countries, including commercial and economic, monetary and banking issues and export of electricity and gas".

The President also referred to the common views of the two countries on bilateral, regional and international issues and expressed hope that the visit of the high-ranking Iraqi delegation to Tehran would stabilise the good relations between the two countries and be an effective step towards common regional issues".

In this press conference, the Prime Minister of Iraq, Mohammed Shia' al-Sudani, appreciated the generous invitation of the President of Iran to visit Tehran and said, "Today we are in Tehran to discuss bilateral economic, political and security relations and to discuss the latest international developments".

The Prime Minister of Iraq continued stating that the visit of the Iraqi delegation to Tehran is in line with the strengthening of the historical relations between Iran and Iraq and added, "The Iraqi nation and government will never forget the support of the Islamic Republic of Iran, especially since the beginning of the attacks of ISIS terrorists against this country and the sacrifice of Iranian brothers alongside their Iraqi brothers in the battle of right against wrong".

Al-Sudani further emphasised the importance of joint cooperation between the two countries in the fight against terrorism and narcotics and stated, "These meetings are necessary in order to create common and solid foundations between us for the implementation of agreements made in various fields".

The Prime Minister of Iraq also emphasised the importance of economic cooperation and its effect on improving the security of the region and stated, "In the meeting with the honourable President of Iran, we agreed to activate the meetings of the economic committees of the two countries and to transfer the results of these meetings to the Supreme Committee of the two countries".

Al-Sudani emphasised, "Iraq is trying to pay Iran's demands with special mechanisms, and today discussions were also held in this field and this issue will be followed up through bilateral committees".

The Prime Minister of Iraq referred to the upcoming meetings between the oil ministers of the two countries and said, "In these talks, projects related to the transfer of crude oil and their purification in refineries to extract oil derivatives and other projects will be discussed".

Emphasising that it is the official policy of the Iraqi government that this land should not be a starting point for harming the neighbouring countries, he stated, "We follow this policy in our diplomatic relations in order to have a balanced policy with friendly and brotherly countries based on the principle of mutual respect and non-interfere in other's internal affairs".

The Prime Minister of Iraq stated, "The Secretary of the Supreme National Security Council of Iraq is also present in this trip and will discuss security issues with his counterpart in order to reach an understanding on the working mechanism and field cooperation in this field and prevent any tension".