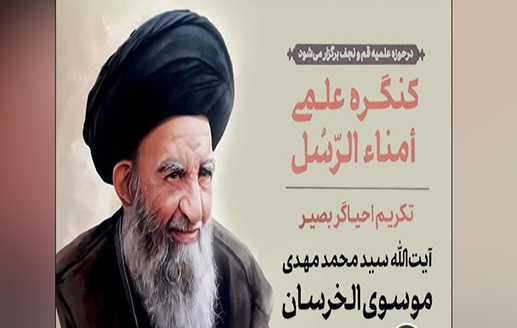 The session of the commission “Scientific, Ethical, Maʿrifa and (Shiite-Sunni) Proximity-seeking Characteristics of Ayatollah Al-Khersan”, chaired by Ayatollah Mohammad Hadi Yusofi Gharavi, was held on Wednesday morning, November 23, 2022, at the jurisprudence center of the Immaculate Imams (a.s.) in Qom.

AhlulBayt News Agency (ABNA): The session of the commission “Scientific, Ethical, Maʿrifa and (Shiite-Sunni) Proximity-seeking Characteristics of Ayatollah Al-Khersan”, chaired by Ayatollah Mohammad Hadi Yusofi Gharavi, was held on Wednesday morning, November 23, 2022, at the jurisprudence center of the Immaculate Imams (a.s.) in Qom.

“Allameh Al-Khersan considers belief as the basis of Islam,” he added, “He has put the topics on the basis of proofs, arguments, fairness and reason. Also, he considers ideological issues to be effective in historical issues.”

Then in the conference, Ali Abdul Hussain Al-Muzaffar, in presenting his article entitled “Study the approach of Sayed Al-Khersan in Hadith, by studying his writings” stated, “Allameh Al-Khersan is the real servant of Islam. He himself is the summary of the school of Ayatollah Khoei and Agha Bozorg Tehrani. He has been engaged in scientific topics in Najaf Seminary for nearly a century.”

“By researching the works of past scholars, he presents the topics in a comprehensive form,” he added.

Further, Abd al-Karim al-Dabagh, in the presentation of his article entitled “Prayers of Sayed Muhammad Mahdi Al-Khersan with the scholars of Kadhimiya” stated, “The scientific and intellectual heritage of a personality like Allameh Al-Khersan should not be neglected. I met him on a Friday, and he welcomed me very humbly.”

Also Sayed Muhammad Ali bin Sayed Adel Al-Alavi, presenting his article entitled “Divine fragrance is the moral of Allameh Al-Khersan” said, “My father told me about the meeting he had with Allameh Al-Khersan that he has great love and enthusiasm in Knowledge.”

“Tolerating hardships, attending gatherings of ulama, perseverance in religious and worldly affairs, patience in the era of Baathist rule in Iraq, are the characteristics of Allameh Al-Khersan. He has a spiritual and moral face,” he added.

Then Hojat al-Islam Salawati Golestani, in presenting his article entitled “Shabaniyah Intifada of Iraqi Shiites with the Marjaiat of Ayatollah Khoei and the role of Ayatollah Al-Khersan and Najaf Seminary in the fight against Saddam” stated, “Iraq used to be the capital of AhlulBayt (a.s.). But unfortunately, cruel rulers have ruled this region and country throughout history. Britain entered Iraq in 1915 and ended the rule of the Ottoman Empire.”

“At this time, Iraqi scholars and Shiites entered the war and the Iraqi revolt against the British, (also known as the 1920 Iraqi Revolt or the Great Iraqi Revolution), began in 1917, and as a result, thousands of people were martyred. Following this uprising, Shiite scholars were exiled, and the expulsion from Iraq was a bitter experience for Shiite Marjaiat,” he added.

About the uprising of the Shiites during the era of Ayatollah Khoei, he said, “Iraq was liberated with the presence of the Americans (in 1991). They asked Ayatollah Khoei to accept the leadership of the Intifada, which he reluctantly accepted, and the Intifada did not reach the result.”

“Throughout history, the Shiites have been oppressed, and in the age of Occultation of Imam Mahdi, when restrictions are high, Shia must be preserved,” he stated.

It worth mentioning that the Najaf section of the “1st Conference of the Umana al-Rosol (Trustees of the Messengers): Commemoration of the Grand Ayatollah Sayed Muhammad Mahdi Al-Musawi Al-Khersan” with research meetings was held in the Holy Shrine of Imam Ali (a.s.). The closing ceremony of this section was also held on the Tuesday evening, October 18, 2022, in the conference hall of Lady Fatimah Zahra (a.s.), and the authors of the selected articles and a number of organizers of the conference were appreciated.

Also, the two holy shrines of Imam Ali (a.s.) and Imam Hussain (a.s.), as well as about 30 scientific and cultural institutions – including the AhlulBayt (a.s.) World Assembly – have participated in holding this conference.