International Conference Trustees of Messengers to be held on November 23 and 24, in Qom 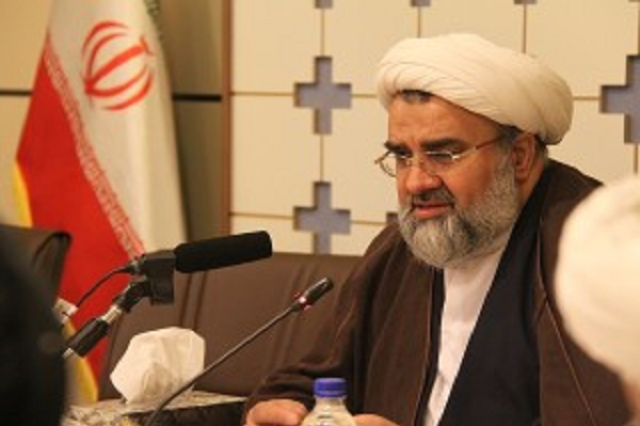 Secretary of the International Conference Umana al-Rosol (Trustees of the Messengers) explained the holding of this international conference in Qom.

AhlulBayt News Agency (ABNA): Secretary of the International Conference Umana al-Rosol (Trustees of the Messengers) explained the holding of this international conference in Qom.

On November 119, 2022, Hojat al-Islam Reza Eskandari, in a press conference at the Ayatollah Haeri Hall of the Seminary Management Center, stated, “The purpose of holding this conference is scientific interaction between seminaries around the world, especially with Najaf Seminary, which has a history of a thousand years, where the dignitaries, who spread the teachings Quran and AhlulBayt (a.s.) to the far corners of the world, have been trained.”

“Another goal of the conference is to introduce the dignitaries of seminaries who played an important role in scientific, preaching, social, political fields and in different dimensions,” he added.

“One of the most important personality dimensions of grand ulama is their moral and spiritual character. These great people had valuable moral virtues, so that even it has been famous for their enemies,” expressed the Secretary of the International Conference Umana al-Rosol.

“We have many figures from whom hundreds of volumes of books have been remained, who spent their lives acquiring religious knowledge, and deeply research about it, and making it available to humanity for the hereafter and worldly felicity,” he added.

“The conference is held with an international approach,” the Secretary of the International Conference Umana al-Rosol continued, “In the program of the conference, ten categories are considered, and in the coming years, based on these categories, we will identify the figures and commemorate them.”

“The categories according to which we identify the dignitaries and appreciate them include the scholars who are in the were active in fundamentals of Fiqh (Jurisprudence) and Osul (Principles), understanding and interpretation of Quranic sciences, knowledge of the AhlulBayt (a.s.) and their school, Imamate and Wilayat, Islamic history and the life of the AhlulBayt (a.s.), ethics, Islamic culture and civilization, emigration and propagation, struggle and anti-arrogance, unity and proximity,” he stated.

“So far, more than 50 volumes of the books of Ayatollah Musawi al-Khersan have been published. But he has many writings on various subjects, including Hadith, Rijal (the biography and genealogy of hadith narrators), history, theology, and sometimes Fiqh (jurisprudence), and nearly 50 volumes of his books have not yet been published yet,” he expressed.

Emphasizing the importance of reviving the publication of Shiites works, Eskandari added, “Ayatollah Khersan’s books have been published in the form of two software programs with the cooperation of Noor Computer Research Center of Islamic Sciences and Mowsueh (encyclopedia) Institute, and will be distributed in important libraries in Iran, Iraq and other parts of the world.”

“For the conference, two secretariats have been established in the seminaries of Qom and Najaf independently, but in terms of committees and content, these two secretariats work harmoniously and coherently,” he stated.

“Nearly 60 book volumes have been prepared for unveiling at the conference, 10 of which are products and articles collected in the secretariat,” noted the Secretary of the International Conference Umana al-Rosol.

“In this conference, three commissions have been considered regarding the spiritual, moral and Ma’arifa life of Ayatollah al-Khersan, as well as the scientific approach, and the evaluation of the impact of Ayatollah Khersan’s writings on the promotion and expansion of the AhlulBayt (a.s.) school,” continued the Secretary of the International Conference Umana al-Rosol.

“This conference will be held on Wednesday, November 23 and Thursday, November 25, 2022, at the seminary of Imam Kazem (a.s.) and the jurisprudence center of Immaculate Imams (a.s.),” he reminded.

It worth mentioning that the Najaf section of the “1st Conference of the Umana al-Rosol (Trustees of the Messengers): Commemoration of the Grand Ayatollah Sayed Muhammad Mahdi Al-Musawi Al-Khersan” with research meetings was held in the Holy Shrine of Imam Ali (a.s.). The closing ceremony of this section was also held on the Tuesday evening, October 18, 2022, in the conference hall of Lady Fatimah Zahra (a.s.), and the authors of the selected articles and a number of organizers in the conference were appreciated.

Also, the two holy shrines of Imam Ali (a.s.) and Imam Hussain (a.s.), as well as about 30 scientific and cultural institutions – including the AhlulBayt (a.s.) World Assembly – have participated in holding this conference.