Qaem-100, the next in Iran's string of aerospace achievements 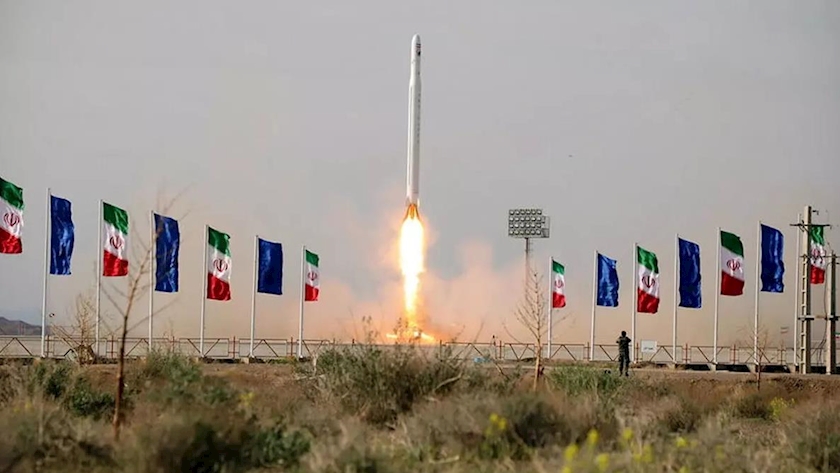 During the past 4 decades, the Islamic Republic of Iran has taken spectacular steps toward missile and space technology, while enduring sanctions; and eventually achieved the full cycle of space technology.

AhlulBayt News Agency: During the past 4 decades, the Islamic Republic of Iran has taken spectacular steps toward missile and space technology, while enduring sanctions; and eventually achieved the full cycle of space technology.

Twelve years ago, Iran successfully launched Omid Satellite into space and that was the beginning of the string as the country joined the global space tech by sending the Nour-1 satellite to space through Qased carrier.

And now, there is Qaem-100 satellite carrier was successfully launched.

The Commander of the Space Department of IRGC Aerospace Force Brigadier General Ali Jafarabadi says Iran is seeking to reach a point where it can meet its space needs and provide satellite-launching services to the neighboring and other Muslim countries.

The West interpreted the launch of Qaem-100 not as a simple satellite carrier, but as the launch of an intercontinental ballistic missile.

The Israeli media acknowledged that the regime's authorities were deeply concerned about the Qaem-100 launch and considered it as the showcase of Tehran's power.

General Jafarabadi says: "It is not about either defense or space issue; The US is worried about the progress of Iran, so it tries to restrict the country through pressures and sanctions but in the past 43 years, Iran's has not stopped its way the getting powerful.

Qaem -100 is a homegrown satellite carrier designed by the Islamic Revolutionary Guard corpse Aerospace Division, capable of putting satellites weighing up to 80 kilograms into orbit 500 kilometers from the earth's surface.

There, in the ceremony, the Commander of the IRGC Aerospace, Brigadier General Amir-Ali Hajizadeh, said that it was under the guidance of the Commander-in-Chief Ayatollah Khamenei and the endeavor of the Iranian scientists the success was accomplished and that the string would continue.

In a tweet also, Nasser Kanaani wrote: "The launch of 'Qaem 100' is another manifestation of the national authority and the capability of the young Iranian scientists for reaching the peak of science and new technologies under the maximum pressure of sanctions."

Qaem-100 satellite carrier can place satellites weighing 80 kg in an orbit of 500 km from the Earth with three stages of solid fuel. The engine thrusting the rocket is 'Rafe' which was tested successfully last winter.

Qaem-100 has another launch ahead until the current Persian year and will carry several satellites simultaneously to above the 500-km orbit from the Earth.

It is the second satellite carrier that IRGC successfully sent to space after Qased. The two are different from each other particularly in that pint that the latter uses liquid fuel in the first stage and the former uses solid fuel.

A significant point with Qaem-100 is that it is a suborbital rocket, that is it did not carry any satellite to space and returned to the Earth; in fact, it was a test to see if the rocket was capable of carrying to orbit around the Earth.

The primary results of the test showed that Qaem-100 could put a satellite of 80 kg in the orbit, so efforts will be continued to develop the next generations of the type which are capable of putting 500 kg satellites in the orbit.

Qaem-105, Qaem-110, and Qaem-120 are to be the next members of the family with the latter being planned to put a satellite in geosynchronous orbit, 36,000 km from the Earth.

Currently, Iran is among the 10 countries in the world possessing space technology.