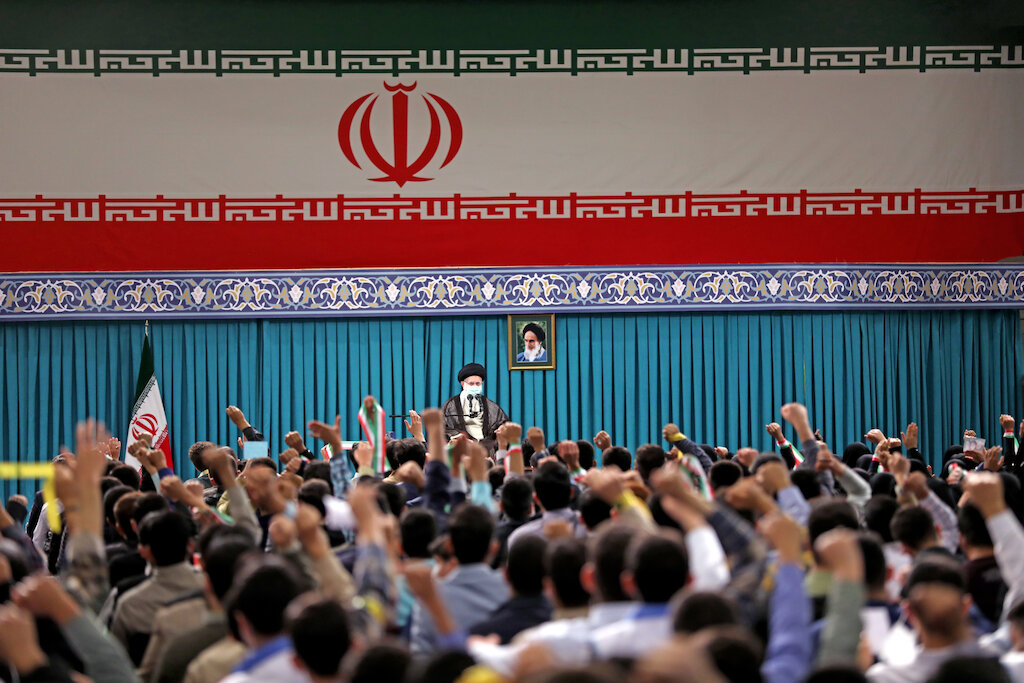 Supreme Leader of the Islamic Revolution Ayatollah Seyyed Ali Khamenei stressed that some people think that the US is an untouchable power, while it is absolutely vulnerable.

AhlulBayt News Agency (ABNA): Leader of the Islamic Revolution, Imam Khamenei, met with hundreds of students on Wednesday, November 4, 2022 in the Imam Khomeini Hussainiyah. This meeting was held on the occasion of the National Students Day and National Day of Fighting Against Global Arrogance and Imperialism which are celebrated on the 13th of Aban (4th of November).

He described the 13th of Aban as a historical and educational day and stated: “The attitude of the Americans toward this important day and its congenial and unifying gatherings is that of anger and frustration, because this day is both the embodiment of the United States’ evils and the embodiment and proof of America’s vulnerability and the possibility of its defeat.”

Recalling the historical events of the 13th of Aban, the Leader of the Revolution referred to the exposing speech and exile of Imam Khomeini on November 4th, 1964, adding: “Imam Khomeini did not tolerate the law which provided that the tens of thousands of Americans based in Iran would be immune from the judicial consequences of their crimes. This law was approved by the direct order of Mohammad Reza Pahlavi to the parliament of that day. It was because of this disapproval that [Imam Khomeini] was exiled.”

Imam Khamenei also recounted the killing of a number of students that took place in front of Tehran University on November 4th, 1978, as well as the students’ attack on the American Embassy on November 4th, 1979. “During that attack, many documents were found that revealed the many treasonous acts, interferences, and thefts of Iran’s resources by the American government during the time of the tyrannical regime, as well as their various conspiracies against the Islamic Revolution.”

The Leader refuted the United States’ insistence that the beginning of the dispute between the Iranian nation and the US was due to the attack on the Spy Den (US embassy), as a big lie. He said: “This dispute started on August 19th, 1953, when the US, with the help of England, overthrew Mosaddeq’s national government by staging a reprehensible coup. Mosaddeq was neither a ‘hujjat ul-islam’ [cleric], nor did he claim to want Islam. His only crime was that he said Iran’s oil should be in the hands of the Iranian nation, not the British. However, because of their interests, the Americans could not even tolerate this person. Contrary to Mosaddeq’s expectations that the US would help, they stabbed him in the back, and instead, they overthrew him by spending money, with the help of a number of traitors and thugs.”

Imam Khamenei went on to describe the words of America’s current politicians about supporting the Iranian nation as the height of shamelessness and hypocrisy. He addressed them with the following question: “Is there anything that you had the ability to do against the Iranian nation in the past four decades, that you haven’t done? If you haven’t engaged in direct military war, it was either because you could not do it or you were afraid of the Iranian youth.”

In reviewing the crimes and conspiracies that the United States had been a part of, following the victory of the Revolution, Imam Khamenei referred to: Washington’s support for separatist groups at the beginning of the Revolution, the coup d’état attempt at the Nojeh Military Base in Hamedan, their support for the blind terrorism of the MKO which led to the killing of thousands of martyrs across the country, their support of brutal Saddam Hussain during Iraq’s imposed war on Iran, the US missile attacks and the downing of the Iranian passenger airplane in the skies of the Persian Gulf which resulted in the deaths of over 300 people and their shameless conduct in honoring the navy captain who shot down this passenger plane, their sanctions on the Iranian nation since the first year of the Revolution, imposing the most severe sanctions that history has ever witnessed in the last few years, as well as their support for unrest and sedition in Iran.

Imam Khamenei said: “Prior to the sedition in 2009, Obama wrote us a friendly letter, but after that, the Americans openly declared their support for the seditionists in the hope that they might be able to destroy the Islamic Republic in this manner.”

The Leader of the Revolution also referred to the criminal act of assassinating Martyr Soleimani and his companions. Addressing the Americans, he stated: “You Americans openly declared that you killed our fearless general. You murdered him and you were proud of it and you announced that you gave the orders. Martyr Soleimani was not just a national hero. He was the region’s hero. Martyr Soleimani played a major and unparalleled role in solving the problems of several countries in the region. You martyred this great man and his companions – Martyr Abu Mahdi al-Muhandis and several others. We will never forget the martyrdom of Martyr Soleimani. We have said things about this and we stand by our word. It will happen at the right time, at the right place, God willing.”

Addressing US officials, he added, “You supported those – the Zionists – who assassinated our nuclear scientists. By freezing billions of dollars of the Iranian nation’s assets in the US and in other countries, you have denied the Iranian people the use of their assets to reduce their problems. Your fingerprints can be seen in most anti-Iranian events. And then you lie with absolute insolence and shamelessness, claiming that you empathize with the Iranian nation? Of course, the Iranian nation – getting the better of you – has thwarted many of these enmities.”

The Leader of the Revolution also pointed to signs of the decline of the United States. “The signs of this obvious decline can be seen in America’s unprecedented domestic problems in the economic, social, and moral fields, as well as in the internal conflicts and blood-stained divisions inside the US.”

Imam Khamenei considered another sign of America’s decline to be its miscalculation of the world’s affairs. “An example of this miscalculation was the US attack on Afghanistan 20 years ago to eradicate the Taliban. This attack was accompanied by a large number of crimes and killings. However, due to delusions about the issues, they were forced to exit Afghanistan after 20 years, handing the country over to the Taliban.”

He added that the US attack on Iraq and their failure to achieve their desired goals was another example of the miscalculation of the Americans. “From the beginning, the Americans sought to install American individuals or their dependents. The current situation in Iraq and the presence of Iraqi politicians in the top positions via elections was never intended by them. But they failed here as well.

Imam Khamenei also pointed out the United States’ failed attempts in Syria and Lebanon, especially during the recent issue of determining maritime gasfield borders, as other examples of miscalculated failures and he added: “A sign of America’s decline is the election of people like the current and the former president. In the previous term, somebody like Trump [was elected] whom the world considers to be crazy, and after he was defeated, a man like this current one comes to power, which everybody knows his condition.”

The Leader went on to speak about the obvious role of the enemies in the riots that have been taking place in the country during the past few weeks: “The events that took place these past few weeks were not merely street riots. They were detailed plots. The enemy initiated hybrid warfare. The enemy, namely the United States, the Zionist regime, some insidious and malicious European powers, and some groups, came to the scene with all of their capabilities.”

Imam Khamenei denounced the terrorist attack in the Shahcheragh shrine [in Shiraz] and the killing of innocent people and children as a heinous crime. “What had the school boys who were martyred in this incident done to deserve this? The young boy who lost his father, mother and brother in this criminal act and suffered such an immense amount of grief, what did he do to deserve this? The young, pious, and religious student, our dear Arman, who was martyred while being tortured and his lifeless body was abandoned on the streets of Tehran, what did he do to deserve this?”

Imam Khamenei also criticized the so-called supporters of human rights for their silence after the terrorist attack, stating: “Why have they not condemned the Shiraz incident? Why do they repeat a false claim thousands of times on their platforms on the internet, yet ban the name of ‘Arsham’ [one of the child victims of the terrorist attack]? Are these so-called supporters real supporters of human rights?”

The Leader of the Revolution also made reference to the signs of change in the world order and the emergence of a new world order. “The dimensions and nature of the new order are not exactly known, but its layout can be drawn. The first basic line of the new order is ‘the isolation of the US’. Unlike in the past, when the Americans considered themselves the only dominant power in the world, the US does not have an important position in the new order and is isolated. It will have no choice but to stop interfering in various parts of the world.”

In his concluding remarks, Ayatollah Khamenei stated: “It was the Islamic Revolution that awakened the youth, both during the uprising, in the final year of the uprising, when the youth entered the scene on the instructions of Imam Khomeini, and after the uprising, up until today. Our youth have been growing every day. In order to neutralize the state of our youth, the enemy has started creating content targeting the minds of our young people. The large amount of lies that are prevalent on social media platforms are a result of this. You need to create content which contains truthful and correct information and convey it to the youth before the enemy creates content that is false, misleading, and filled with lies.”