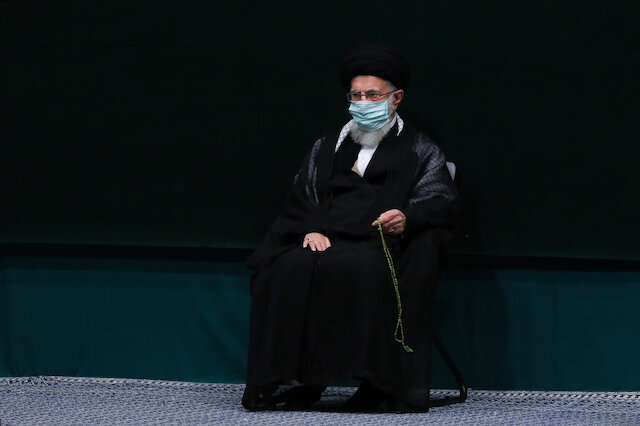 On the occasion of the Arbaeen (40th) of the martyrdom of Imam Hussain (pbuh), Imam Khamenei, attended a mourning ceremony on Saturday, September 17, 2022. University students from throughout the country also participated in this mourning ceremony.

AhlulBayt News Agency (ABNA): On the occasion of the Arbaeen (40th) of the martyrdom of Imam Hussain (pbuh), Imam Khamenei, attended a mourning ceremony on Saturday, September 17, 2022. University students from throughout the country also participated in this mourning ceremony.

The Imam Khomeini (ra) Hussainiyah hosted university student mourning groups on the Arbaeen (40th) of Imam Hussain (pbuh). The university students chanted “Labayk Ya Hussain” in unison with the pilgrims who are walking to Holy Karbala. This mourning ceremony was conducted with the Leader of the Islamic Revolution in attendance.

At the end of the mourning ceremony, Imam Khamenei explained that the pure, believing hearts of the young people add quality to their supplications and the sermons while increasing divine guidance. He stated, “The ceremony for Arbaeen, which is the lofty flag of Imam Hussain (pbuh), was conducted with more magnificence and glory this year than any other period in history.”

The Leader of the Revolution emphasized that the miraculous event of the Arbaeen Walk shows that it is the divine will for the flag of the Islam of the Household of the Prophet (pbut) to be raised even higher. He said, “Such a movement could not have come about based on any human strategy or planning. This is God’s hand which is giving us good news with this magnificent manifestation that this path that is before us is clear and can be travelled.”

Imam Khamenei referred to the continuous efforts of the bandits who are stealing the truth and the ill-wishers to work against such an important event as the inspiring Arbaeen Walk. He recommended that everyone carry out their duty, and he stressed, “These two vital, eternal sentences of the Qur’an, ‘Enjoining the truth’ and ‘Enjoining patience,’ should always be fundamental instructions for us, especially today.”

He expounded on this point that patience means resistance, persistence, not feeling tired, and not feeling that one has arrived at a dead end. He addressed the dear youth who are devoted to heyats and the Qur’an saying, “Follow the path of truth yourselves and also endeavor to guide others to this path by enlightening various environments, including the universities, with God’s color and light.”

In addition, in this mourning ceremony, Hujjat al-Islam Aaali spoke of the need for the Islamic nation to prepare itself for the coming of the world’s Savior, “The Arbaeen pilgrimage, which symbolizes the convergence of the believers and has become a magnificent gathering of people who are seeking the truth, is a unique platform for educating the collective Islamic society, strengthening the bonds between the believers, and preparing for the reappearance of the Savior.”