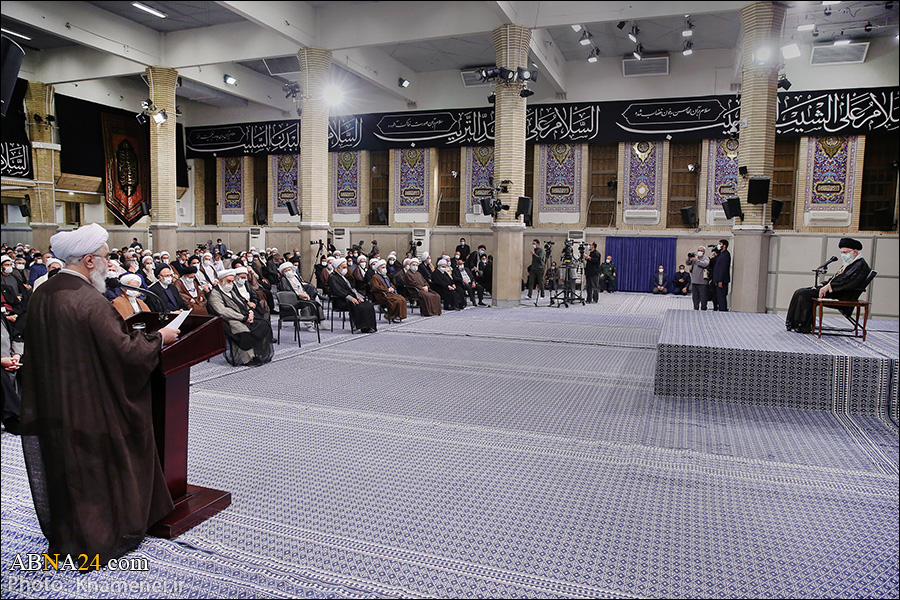 The Secretary-General of the AhlulBayt (a.s.) World Assembly stated, “The modern Islamic civilization will be a human and global civilization based on monotheism, justice, thought, spirituality, establishing complete security, dialogue, and tolerance based on Mohammad and Alawite Islam against Umayyad, Abbasid, and American Islam.”

AhlulBayt News Agency (ABNA): On Saturday morning, September 3, 2022, during the meeting of the participants in the 7th General Assembly of the AhlulBayt (a.s.) World Assembly with the Supreme Leader of the Islamic Revolution in the Hussainiah of Imam Khomeini (r.a.), Ayatollah Reza Ramazani stated, “The AhlulBayt (a.s.) World Assembly is one of the fruits of the Islamic Revolution led by Imam Khomeini (r.a.), and with the approving of the Imam Khamenei, and along with other Shiite institutions and activists, it works in the direction of reviving and promoting the AhlulBayt (a.s.) teachings, as well as empowering Shiites.”

“The 7th General Assembly was held with the motto: “AhlulBayt (a.s.), the axis of rationality, justice and dignity”. These values ​​are the urgent need of the contemporary world. The Islamic Republic of Iran is fighting for the return of religion to the human life, to show the functions of religion in the political and social sphere, and to fight against the efforts of enemies to eliminate religion in the new era,” added the Secretary-General of the AhlulBayt (a.s.) World Assembly.

“Our future path should be taken according to rationality, with the understanding of the discourse of the contemporary world, as well as for the realization of justice and human dignity,” he emphasized.

“With the end of the East-West Cold War, today the world is witnessing a confrontation between the two fronts of Islam and arrogance in all fields,” Ayatollah Ramazani added.

“The followers of the pure Islam of Muhammad (p.b.u.h) and the Shiites of the world have a historical and decisive role in overcoming challenges and threats, realizing scientific growth, progress and development, maintaining unity and synergy of capacities in the Islamic world, and moving towards modern Islamic civilization,” noted the Secretary-General of the AhlulBayt (a.s.) World Assembly.

“The realization of modern Islamic civilization requires jihad and fighting enemy’s soft war. This important issue has been rightly emphasized by our wise Supreme Leader over the years, and in this regard, he has recently invited everyone to the Jihad of Enlightenment,” he noted.

“The Jihad of Enlightenment is a continuous and historical process that started from the Ashura event of Imam Hussein (a.s.), even earlier, from the beginning of the prophethood of Prophet Muhammad (a.s.) and will continue until the Reappearance of Imam Mahdi (a.s.). The late Imam Khomeini (r.a.) was the flag bearer of change in global equations and Islamic societies, as well as the inventor of the Jihad of Enlightenment in the current era. This point has always been emphasized in the statements of the Supreme Leader of the Revolution in explaining the path and role of Imam Khomeini (r.a.),” Ayatollah Ramazani added.

Ashura and Arbaeen, the important battlefields of the Jihad of Enlightenment

Considering the Ashura and Arbaeen as the important battlefields of Jihad of Enlightenment, the Secretary-General of the AhlulBayt (a.s.) World Assembly of emphasized, “Ashura is a model for the followers and lovers of AhlulBayt (a.s.) and all Muslims and followers of divine religions, as well as all humanity, until the Reappearance of the Savior of mankind, Imam Mahdi (a.s.).”

“The members of the Assembly work in the Shiite communities of the world, recognizing their religious duties and obligations and knowing the current situation of the Shiites of the world,” he added, “Today, these members act with a futuristic approach, based on the transformative speech and performance of the Supreme Leader of the Revolution.”

“The members of the Assembly, with a comprehensive, accurate and deep look at the AhlulBayt (a.s.) teachings, using all the capacities of the Supreme Council, scholars and members of the Assembly serving staff in different departments, work to increase the knowledge and insight, the ability and the presence of the followers of the AhlulBayt (a.s.) School all over the world, according to the spirit of spirituality, rationality, justice and continuity on the axis of divine mercy to realize human dignity,” Ayatollah Ramazani noted.

“In this path, by synergizing the capacities and capabilities of the AhlulBayt (a.s.) followers, emphasizing the transformation, growth and progress, which is mentioned in the Statement of the Second Phase of the Revolution, it is necessary to plan the future movement for the advancement of science, ethics and spirituality, independence as well as seeking independence, accurate identification of the enemy and ways to fight against it, justice and fight against corruption and realization of Islamic lifestyle,” added the Secretary-General of the AhlulBayt (a.s.) World Assembly.

Document for change for the of the AhlulBayt (a.s.) World Assembly will soon be presented to the Supreme Leader

While pointing out that document for the change of the AhlulBayt (a.s.) World Assembly will soon be presented to the Supreme Leader, Ayatollah Ramazani stated, “From the first day of the new management period, transformational measures have been taken in goals, structures, methods and performance, and it was not just the compilation of the document.”

“Despite the intellectual, political diversity and tensions in the Islamic world, the AhlulBayt (a.s.) World Assembly tries to communicate all the AhlulBayt (a.s.) followers, sources of emulation, religious, scientific, cultural and worship centers, communities, religious institutions, Shiite sects, figures and activists. To achieve this goal, we emphasize the necessity of restructuring the Assembly, employing younger international members, strengthening the members of the Assembly, especially the Supreme Council, as well as paying attention to the middle circles in Shiite communities, and empowering the AhlulBayt (a.s.) followers,” he said.

“To achieve these goals, the basic conditions are monotheism, unity, struggle and perseverance,” Ayatollah Ramazani said in the end.