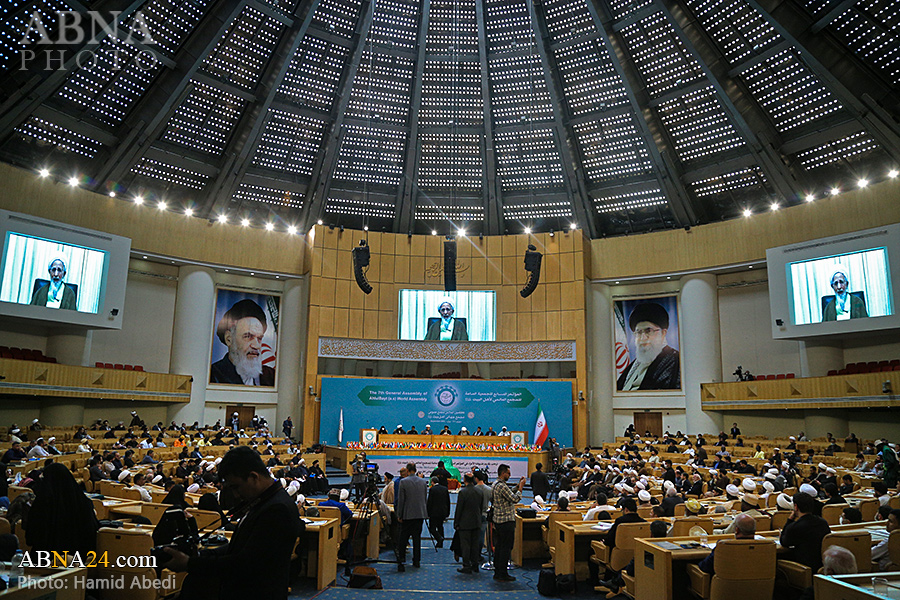 Ayatollah Abdullah Javadi Amoli issued a video message to the closing ceremony of the 7th General Assembly of the AhlulBayt (a.s.) World Assembly.

AhlulBayt News Agency (ABNA): In his video message to the closing ceremony of the 7th General Assembly of the AhlulBayt (a.s.) World Assembly, Grand Ayatollah Abdullah Javadi Amoli about rationality, justice and dignity, said, “Rationality is like a pure tree, whose fruits are justice and dignity.”

“Practical rationality is related to intention, determination, and the like. It is the guardian and guide of motivation and has nothing to do with thought. Examples to define the border of these two concepts: perhaps there is a reasonable thing but associated with sin. Because what decides here is practical reason. A person may understand something 100% but not act upon it. The house of Pharaoh believed that Moses (p.b.u.h) was a prophet, but they did not follow him,” Grand Ayatollah Javadi Amoli added.

“The word “یعقلون” is mentioned in the Quran. The final and highest position of reason that it reaches the lofty base is at the end of Surah Al-Nisa, where He said: “Prophets who give good tidings and warn”. It means that God has sent both prophets who give good tidings and prophets who warn. In the world, not only there is no one greater than God, but also there is no one equal to Him. God means the greatest. But reason can argue with him. God said that He sent the prophets (p.b.u.h) to prevent the argument of reason against Him. According to this verse, if there were no prophets (p.b.u.h), the “عقل” (reason) would argue against God: You knew that we would come to such a place after death, why didn’t you send a messenger?!” he continued.

“With the coming of the prophets (p.b.u.h), the reason does not have an argument, but before them it had. The cultural pole of religion is reason; the pole of understanding of a nation is its reason, which argues with God and the Prophets. Some are delusional and imaginative; they think they have reason. They have a theoretical mind that is in charge of thinking. Is it possible for a person to have reason without effort and discussion?! If there is no sincerity, can someone have reason?! It is not possible to find a reason that can think about Tawhid (monotheism) and prophethood everywhere,” Grand Ayatollah Javadi Amoli added.

“Therefore, reason is a pure tree with pure branches. The first branch is theoretical reason, and the second branch is practical reason. A person who has such a reason stands up for justice. Nothing but dignity comes from a person who has such a reason. Justice and reason are not opposites. An example of reason is the existence of Imam Ali (a.s.) and Imams (a.s.),” he stated.

Regarding the role of ulama, Grand Ayatollah Javadi Amoli emphasized, “Scholars who bear the name of Velayat, above all intellectual sciences and philosophical and theological knowledge, dos and don’ts, plan, lead and manage the world so that it will reach its highest position with your blessing.”

“The management of the world is your responsibility, honorable scholars. It is obligatory for you to understand and teach Islam well. This should be presented with the rational and narrative power of the seminaries. Try to show Islam with a rational argument. Try to make Islam superior by practicing Islam. Therefore, rationality has the first priority. Justice is placed next, and dignity is their result. If you don’t get rationality from Imams (a.s.), it is not found anywhere else,” he added.

“If ulama are scholars, they manage theoretical and practical reason. They neither go astray, nor block anyone’s way,” Grand Ayatollah Javadi Amoli added.

“The world experienced the first and second world wars, which were bitter experiences. What brings the world to rationality, is this enlightening expression of Islam, as He says, “قُلْ يَا أَهْلَ الْكِتَابِ تَعَالَوْا إِلَىٰ كَلِمَةٍ سَوَاءٍ بَيْنَنَا وَبَيْنَكُمْ أَلَّا نَعْبُدَ إِلَّا اللَّهَ وَلَا نُشْرِكَ بِهِ شَيْئًا وَلَا يَتَّخِذَ بَعْضُنَا بَعْضًا أَرْبَابًا مِنْ دُونِ اللَّهِ” (Say: O People of the Scripture! Come to an agreement between us and you: that we shall worship none but Allah, and that we shall ascribe no partner unto Him, and that none of us shall take others for lords beside Allah.) (Holy Quran, Surah: Al Imran, Verse: 64),” he continued.

“The result of your gathering should be that the world understands that if it behaves wisely, it should come to “that none of us shall take others for lords beside Allah”,” Grand Ayatollah Javadi Amoli emphasized in the end.